Indus’s App Bazaar found its niche as an Indian-language app store. Its big test: being Atmanirbhar. 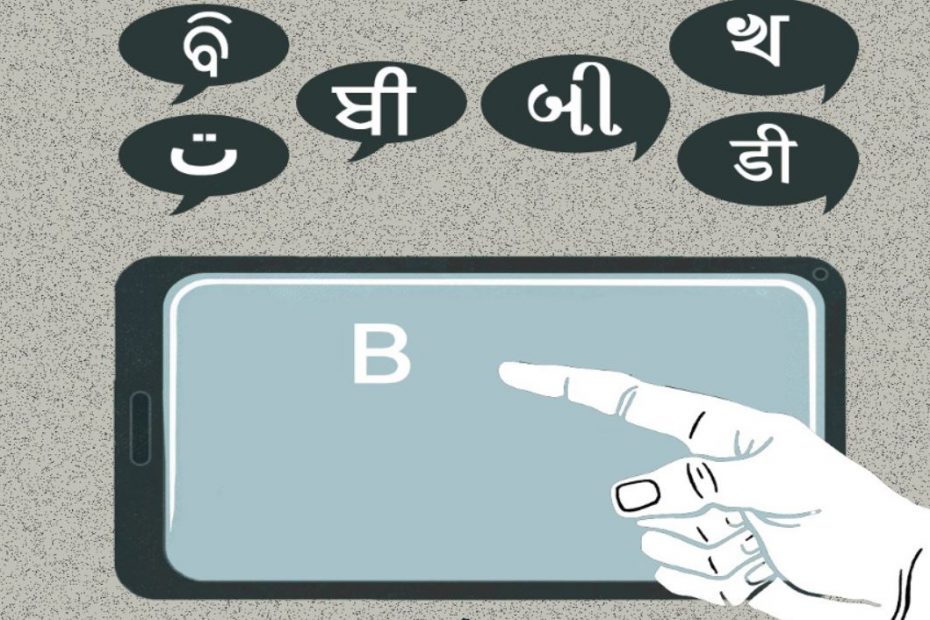 Indus, which neither has a Chinese investor nor a Chinese competitor in India, has been registering steady growth on the back of a made-in-India sentiment. The ban on Chinese apps has further helped its cause. But does it have a strategy to sustain its independent, home-grown streak in the long term?

That stark statistic sums up the rationale of Indus OS, which started up in 2013 with an outsize aim of becoming India’s go-to app store. The Mumbai-based company claims a big chunk of Indians are averse to using Play Store because they are not well versed in English and don’t have an e-mail ID — a prerequisite for downloads from the Google’s app store Indus saw an opportunity in enabling downloads from a store which, being in Indian languages, is easier to use. And App Bazaar was born.

“Our target is to reach users who are not comfortable with English content or those who prefer regional languages for content discovery. This constitutes roughly 85% of all Indians. Moreover, almost 80% of Indians do not have an e-mail address,” says Indus CEO Rakesh Deshmukh.
In India, App Bazaar has acquired 100 million users and around 10 smartphone partners, helping it garner 1 billion-plus monthly app installs and updates. Interestingly, Huawei India is reportedly looking at partnering with Indus for App Bazaar. But having found this niche, does Indus have a long-term strategy to become India’s preferred choice instead of Android or the Play Store? 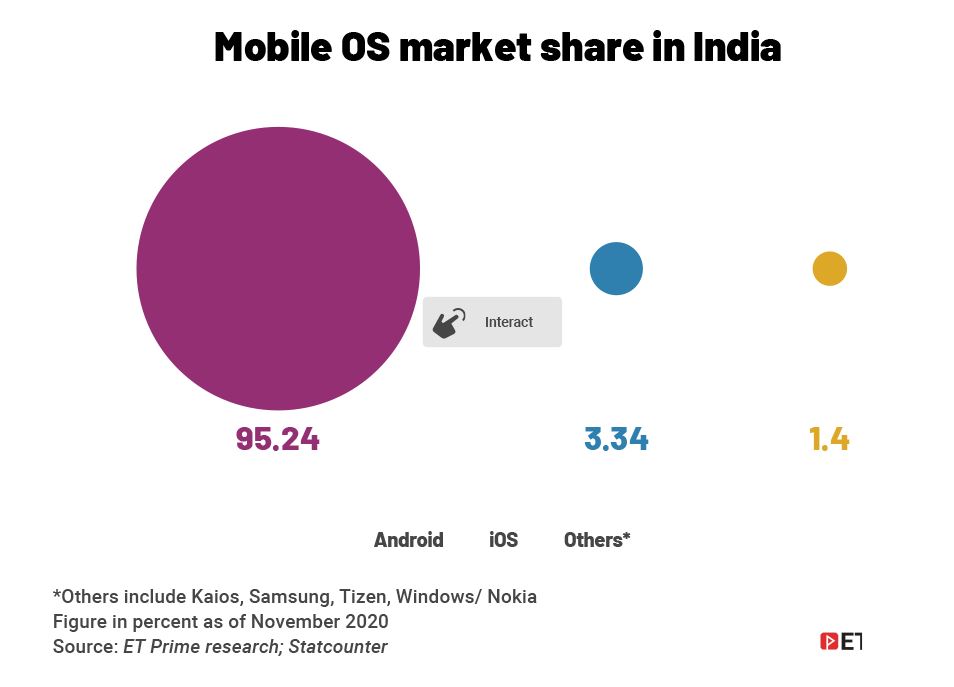 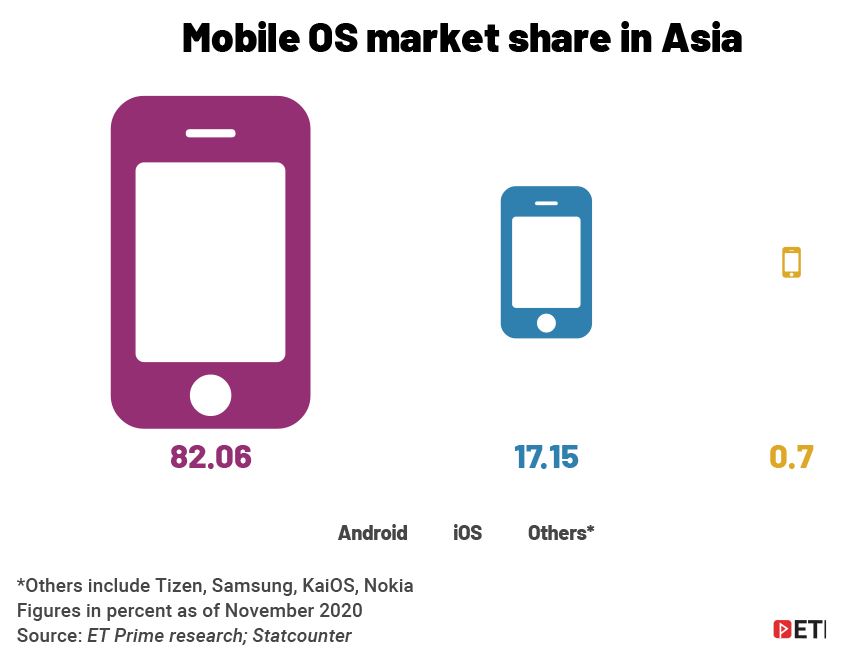 OS Labs, Indus’s parent company has the backing of investors such as Omidyar Network, Samsung Venture Investment Corporation, and Ale India. Non-English speaking users from tier III and tier IV towns, who will now become the next billion smartphone users of the country, are the focus of Indus and App Bazaar.

While experts point out that App Bazaar is yet to be protable, the company claims to have achieved break even last month, riding the ban on Chinese apps.

ET Prime reached out to Indus after the Google-Paytm spat broke out, which brought the issue of an a t m a n i r b h a r Indian app store to the fore, to share its vision and the prospect of becoming India’s go-to app store.

From Silicon Valley giants such as Google, Amazon, and Facebook, to Walmart owned Flipkart, are all looking to capture tier III and tier IV smartphone and non English speaking users. Reliance, too, made a strategic investment in local language developer Reverie Language Technologies last year.

Amid this language push, Indus is being pegged as India’s key smartphone sub operating system. Omidyar India counts Indus as part of its emerging-technology cohort, saying it operates a unique “regional-language operating system”, a suite of proprietary systems, and native applications. According to experts at market intelligence firm Counterpoint, Indus’s cumulative market share as a sub-OS in India rose to 7.6% in 2016, but it is now no longer even in the top five.

Neil Shah, vice-president – research at Counterpoint, sees Indus as a “platform” that converts English UI, content, and apps into vernacular languages to accelerate smartphone adoption for a brand. He adds that there can be no comparison between Indus and Google’s OS, as the former is itself built on Android. Rather, it can be compared with the likes of MIUI from Xiaomi, OneUI from Samsung, Color OS from Oppo, or Oxygen OS from OnePlus. 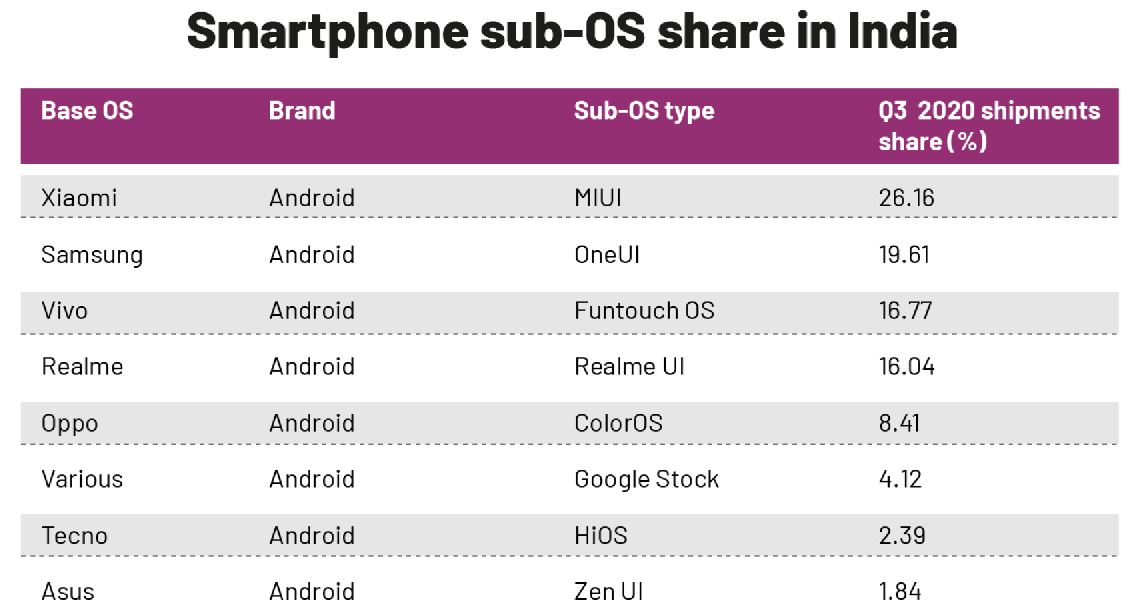 The shift to App Bazaar

Sources close to Indus also say that the company is now concentrating more on App Bazaar than its sub-OS business.

Local language content can be a big draw — out of 500 million smartphone users, only 150 million-200 million are English users, and the rest understand little or no English at all, says an Indus executive. At the same time, India is one of the fastest growing markets for mobile apps.

Indus also wants to be at the forefront in empowering app developers in the country, mainly through partnerships with high-volume commitments. The company has been operating App Bazaar for the last seven years and claims to have acquired a fair amount of experience about the functioning of the app ecosystem.

Here are some of App Bazaar’s facets that stand out:

OEM partners such as Intex, Micromax, Karbonn, Celkon, Swipe, and Samsung form the backbone of App Bazaar. “App Bazaar is adopted as a default on multiple brands, with access to 100 million users, which is almost 20% of the smartphone user base in India,” says Counterpoint’s Shah.

Aligning with the leader

An app store is a complex beast and involves multiple stakeholders working in tandem. The company needs developers to build apps, and users to consume these apps, which have to be distributed via various smartphone brands.

Google, which launched the Play Store in 2008, has acquired over a decade’s experience of operating an app store. “Anything that is built here on will have its own challenges, and it will be a mammoth task to compete with the industry or category leader,” says Deshmukh.

Currently, Google Play Store does not allow distribution of any competing appdistribution platforms. However, Indus is looking to align with Google on this and industry sources tell ET Prime that the latter has given to this idea a listen.

Google’s announcement that it will allow third-party apps in Android’s next version could be good news for App Bazaar, which claims to be India’s largest and fastest-growing indigenous app store, with over 400,000 apps in 12 Indian languages and English.

“Google has announced Android 12 will allow third-party app stores to co-exist with Play store, but detailed guidelines have not yet been issued. Android 12 is slated for release late in 2021 and its adoption (especially in India) will take us deep into 2022. Till then, Indus and App Bazaar will have to take OEM-embed route,” says Deepak Abbot, co-founder of ntech startup Indiagold. He also adds that Indiagold is considering onboarding its app on App Bazaar.

How does Indus make money?

Sources close to the company say App Bazaar has an ad-based monetisation model based on cost per install (CPI) app-promotion campaigns. App Bazaar has worked with 500-plus advertisers and has strong partnerships with various ad networks and attribution platforms such as InMobi, Appnext, Ale, Singular, Branch, and Kochava.

“A 100 million user base is highly attractive to ad exchanges and marketers,” says Counterpoint’s Shah, although he believes that Xiaomi is doing a better job than Indus, since it has built the entire customisation as compared with Indus only powering a vernacular app store.
While earnings information is proprietary and condential, industry sources suggest it varies by platform, OEM, and ad agency. There are no standard pricing and revenue-sharing models, and they are negotiated, a top executive from a market-intelligence firm tells ET Prime.

What the future holds

Any collaboration with Chinese mobile players should be a no-go territory for the company, given the India-China stand-o at the border. Indian tech companies which have got funding from Chinese tech majors are panting for funds, but that’s a trap Indus should avoid.

However, for the next big push, Indus will have to align with Google. It also downplayed the spat between Google and Paytm. The company is looking up to Google for its next big push in India. Sources suggest Google is already in talks with Indian industry after the spat with Paytm.

“With Google, it’s diicult to say if it sees Indus as competition unless the latter tries to circumvent Android policies such as in-app payment (for paid apps and content ) or the billing (Google’s billing system) and so forth,” says Shah.

But when Google’s Android does allow the onboarding of third-party apps, it will mark a monumental shift in its global policy and its product.

Indus’s alignment with behemoth Google looks unavoidable in the days to come. If Indian apps aim to be truly atmanirbhar , the likes of Indus should build an end-to-end home-grown operating system platform like Huawei’s Harmony instead of an Android open-source project, through which Google keeps strengthening its control over the Android platform.