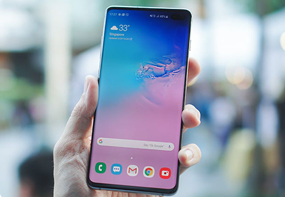 Our user base has grown 10 times in the last 18 months and we are now 100 million users strong,” says Rakesh Deshmukh, co-founder and CEO, Indus OS.

Indus OS, an indigenous platform for app and content discovery, has travelled a long way to create its own space despite the presence of tech giants like Google and Apple, with their Play Store and App Store respectively. Indus OS, which started its journey in 2013, is one of the very few homegrown brands. In an exclusive interview, Rakesh Deshmukh, co-founder and CEO of Indus OS, traces its origins and spells out his vision for the future. Here are some excerpts.

How did the idea of Indus OS come about? What was the thinking behind it? It must have been very challenging at first. Any stories to share from back then?

In 2012, I bought my mother a phone and she struggled to download basic apps on it due to the language barrier. That got the ball rolling. I discussed the idea with my co-founders Akash Dongre and Sudhir B. Since we had already worked on two startups together, this felt like the next challenge that we were waiting for. So, in 2013, we started Indus OS.

Can you walk us through the journey from there?

Our thoughts back then were towards operating systems (OS). We had multiple mobile operating systems vying for supremacy back then. In our mission, we are using smartphones to connect the digital world with the masses by creating a digital ecosystem for 1 billion Indians in their native languages. We partnered with India’s top OEM brands (Micromax, Karbonn and 10 others) and released our OS on more than 100 devices.

After making headway, we decided to focus solely on our own App Store – Indus App Bazaar. We aimed to create a product for multiple user cases, most important being the discovery of apps and content created by local developers and content creators.

Where are you now?

Indus App Bazaar, our discovery platform, started with 300 apps in the first year with a handful of users. It has now become India’s largest indigenous app store with more than 4,00,000 apps and over 100 million users.

In the last 12 months, Indus App Bazaar has delivered over 1 billion app installs and updates by easing app discovery in English and 12 Indian languages. Games, social media, finance, entertainment and shopping are among the top categories of apps being downloaded by our users.

The usage of apps in Indian languages on the platform has increased 2.2 times during the pandemic, with Hindi, Marathi, Gujarati, Tamil and Bengali being the most popular.

Over the years, we have partnered with more than 12 OEMs (Samsung, Micromax, Karbonn, etc) who have us as their default App Store on their devices. Our OEM partners have helped us to market Indus App Bazaar to the Indian audience and have therefore played a significant role in achieving the above-mentioned milestones. They helped us in emphasizing the need for an indigenous app store in regional languages and supported us immensely as we were the pioneers in driving this.

Why did you think it was important to build an indigenous app store?

An indigenous app store is necessary to provide a level playing field to Indian developers. Also, as the language continues to be the biggest barrier to digital adoption in India, a highly successful global platform may not be a perfect fit for its masses. It may make waves initially but to be inclusive to a 1.3 billion population, one needs to be deeply aligned with the culture, have the ability to break the linguistic barriers and be custom made. Thus homegrown players will add more value in the longer run.

How different is your app store from the existing ones? What are its unique features?

Our users can discover new and trending apps in the language of their choice since we have, as mentioned earlier, over 4,00,000 apps in English and 12 Indian languages. Some of our unique features are no mandatory sign-in through email id, availability of apps in multiple languages and AI-based personalization, which ensures a smooth app discovery experience.

Google already lets users use several Indic languages in Android. So, how different is your product from that?

Yes, Google does let you use several Indic languages and their glyphs in Android. When the system language is set to any other language than English, the app store titles and descriptions are automatically converted to that language. This translation, however, is accomplished by transliteration along with machine tools like Google Translate.

This is where Indus App Bazaar sets itself apart. Our expertise lies in tailoring apps into other languages and not simply translating them without working on context. App descriptions are written with precise use of words with a focus on meaning.

Can you talk numbers – the user base that the phones of various OEMs you have tied up has yielded?

Our user base has grown 10 times in the last 18 months and we are now 100 million users strong. A significant role has been played by our OEM partners such as Micromax, Karbonn and Samsung in achieving this milestone. They helped in emphasizing the need for having an indigenous app store in regional languages and supported us as we took the first step in our journey and thus helped us achieve the desired scale.

How important are vernacular mobile users for you? Can you share your understanding of this market and the kind of traction you are seeing there?

Our target is to reach all users who are not comfortable with English or who prefer a regional language for content discovery. As many of the smartphone users in Tier-3 and Tier-4 cities are first-time users of the internet; we ingrained personalization, localization and simplicity into our platform to gain the trust and interest of users and encouraged direct download of apps through Indus App Bazaar.

The highest number of users on the app store are from the states of Maharashtra and Uttar Pradesh followed by Gujarat, West Bengal, Karnataka and others.

What about the recent ban on Chinese apps and the push for an indigenous app store led by PayTM and others? Has it helped you?

With popular apps getting banned, users were looking for an alternative. This was good for our platform and we saw a great rise in the number of users. We recorded 3.5 times app installs since January 2020. We have worked with Indian developers as well as international developers. From our perspective, when the Chinese apps got banned, we were the first App Store that disabled all the apps within an hour. We offer a level playing field, rather than giving any specific developer any special treatment.

What do you think is the untapped potential of the Indian app market?

With over half a billion internet users, India is home to the world’s second-largest internet user base. Affordable smartphones, 4G, and an unprecedented explosion of data consumption are disrupting consumer behaviour and social structures of the country by catering to audiences across demographics and socio-economic segments. This has created a dynamic shift in the Indian app store market as well.

However, the sector is witnessing merely 60 per cent of its app downloads through Google Play Store and Apple’s App Store. The rest is an untapped market belonging to sundry modes of downloads including third-party app stores and offline platforms.

It was time for companies like Indus OS to focus on this gap, and address challenges like language support and content by facilitating simplified mobile applications services. Another surprising factor that continues to be a key challenge in the industry is the number of Indian internet users who do not have a gmail/email ID to log-in. On Indus App Bazaar, we have simplified the process of app downloads by exempting the need for email identification.

Finally, your vision of the future? Where do you see Indus heading from here?

We want to reinvent the entire app store experience and are constantly revisiting our vision to pace an inclusive digital economy through our products like Indus App Bazaar. India is one of the fastest-growing markets for mobile applications. Our key objective lies in empowering app developers in the country, mainly through direct app developer partnerships with high volume commitments.

Given the rising demand for content, we feel there is a dire need for creating opportunities for them and showcasing their work on our platform. Indus App Bazaar especially focuses on providing localised and simple solutions for our users and we hope to attract talent with our vision for the app economy of the country.

Considering long-term growth for our brand, we are also exploring and driving conversations to partner with OEMs globally to tap the ‘managed app store’ market. We have witnessed exponential growth in the past when there is an OEM partnership, especially in terms of the user base.