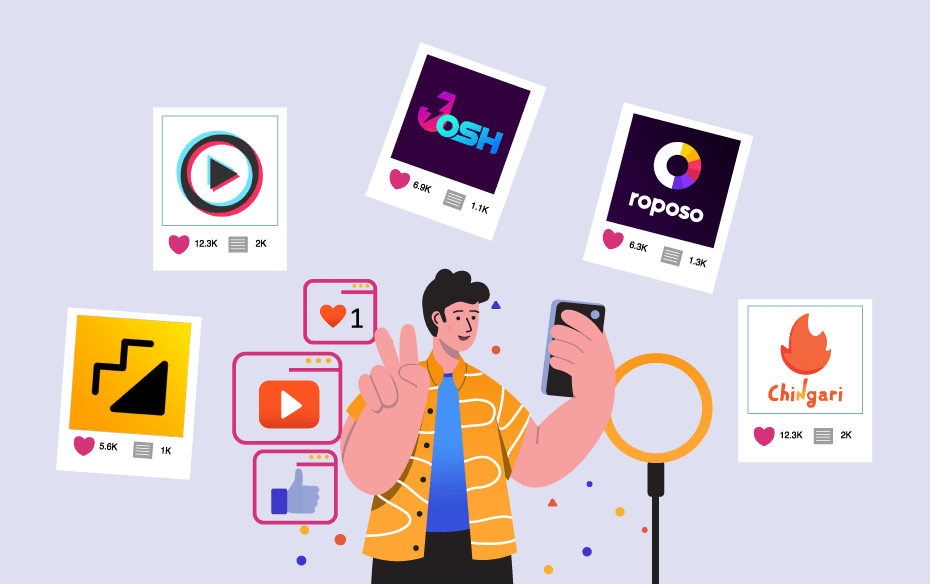 With TikTok’s launch in 2016, it brought about a short-video cataclysm across the world. It gained a lot of popularity in India and in 2019, it became the most downloaded app across Android platforms.

On June 29, 2020, due to national security concerns, TikTok was officially banned from the country.

Indian app developers, seizing the opportunity created in the wake of TikTok’s departure.  A slew of innovative short video apps was released. These apps have not only caught the eyes of Indians across the country but have also developed their own fanbases.

Are you looking for a short-video app that gives TikTok a run for its money? We’ve researched all desi platforms and have come up with an organized list for you.

Read on to find out the short video app most suited for you:

Moj was founded in June 2020. Two days after its release, the app crossed 50K+ downloads. Developed by parent company Sharechat, which joined the unicorn club recently, Moj has uniquely identified filters and other tools to help users customize their short videos.

The application is supported in 15 languages including regional languages like Malayalam, Urdu, Hindi, Bengali, etc. allowing users from all backgrounds to share a piece of the cake.

Moj has also claimed to invest in enabling creators with better tools to help them improve their reach and reach a global audience.

Explore the many challenges that are put out on this platform by different brands and creators as well as take part in some amazing contests that keep coming up.

When the doors had opened for Indian apps to fill in for TikTok, Dailyhunt, one of India’s local news apps, put its best foot forward to create Josh.

Dailyhunt always had its goal of serving India widely and decided to step into the world of short video app to improve its reach. Unlike Moj, Josh is only available in 12 languages including English and other regional languages.

Josh hosts interesting events like the JFLIX Festival and the #Dare2BeAKid challenge which ensures that creators from all age groups, genders, and ethnic backgrounds are constantly creating and engaging on the platform.

If you have a competing spirit and love challenges, download the JOSH app now.

Founded in 2012, much earlier than Moj and Josh, Roposo stands to be the only short-video application that focuses more on providing a glass-clear experience for fashionistas through what they call “Live Shopping”.

Roposo allows users to post stories and review products allowing brands to exclusively use word of mouth in a digital sense through this platform. It has also collaborated with many shopping stores and brands to provide an evolved shopping experience where the users can watch short videos uploaded by fashionistas trying the clothes and instantly buy those products.

This short-video app pays close attention to the user’s likes and preferences and provides suitable suggestions and personalized preferences accordingly.

This app shares a lot of similarities to TikTok including the name (TakaTak) which is clearly recognizable. Belonging to MX Media, this app became the most downloaded application in India in February 2021.

This TikTok alternative allows users to create short videos ranging from dance routines to dubbing Bollywood movie dialogues in their own creative way. MX TakaTak’s quick social platform sharing feature made it go viral in the social media community and is the reason why it grew so fast. It has a user base of more than 100 million and is only continuing to see an upward trend in its total number of downloads. It supports 10 languages including English and other Indian languages.

If you are someone active on social media and love sharing posts and statuses, MX TakaTak is your go-to application. Also, join creators and artists like YoBeat on TakaTak’s Manch and go live with them.

Backed up by global ambassador/ investor Salman Khan, Chingari has become a platform for audiences from all backgrounds. People from rural and urban geographies have used the app to create content and reach out to millions.

The application is made more accessible by being available in 12 regional languages and English. It has won the Atma Nirbhar App competition conducted by the Indian Government.

Chingari has also been said to be a replica of Instagram, which is a huge player in the short-video category after it introduced Instagram Reels.

Overall Chingari is quite a fun app. Apart from the option to create engaging videos, it also allows you to play games and read trending with the help of its partnership with video news app Dekko. This also makes Chingari rank high on infotainment for vernacular users.

If you are a multitasker and want to chat, meet new people, explore the latest news, and are searching for a short-video app with multiple possibilities, Chingari is the app for you.

Want to check out our other listicles? Click here.