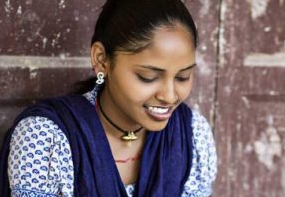 Hasmukhbhai, a successful wholesale textile merchant, who always had his ear to the ground, noticed something fascinating but ​could not​ comprehend​ how it can help his business ​. On a visit to his principals he was shown their recent acquisition that was doing the trick. It was called a ‘computer’. Large companies were using computers to change the way they were doing business, and Hasmukhbhai felt in his bones, that he had to change too. So, he attended a seminar on computers organized by a leading company​ of the day ​. There he met an energetic young man from the company, who agreed to come over and explain this confounded thing to him in great detail. Many cups of tea and numerous meetings later, he began to understand what computers could do for his business, and decided that he should install one in his office. He also decided that this new​ Rs.​ 5 lakh baby (the computer) would be placed under the management of his daughter, Shruthi. She would ‘computerise’ his workplace – an excellent opportunity for her to apply the skills she had gained through the computer course she had recently attended. The company agreed to train Shruthi in computer operations and administration and Hasmukhbhai’s​ (and his daughter Shruthi’s) journey ​with a computer​ began.

This was way back in 1980. I had just entered the country’s nascent computer industry as a young professional keen to understand and harness this new technology and ‘change the world’. That energetic young man, Hasmukhbhai met, was me.

Cut to 2015:  I was at the inauguration of a Skilling Gurukul, set up by us, in Jharkhand where a local tribal dance had been organized. I was told that the girls​, from the graduating class of the local high school​, who were dancing came from local tribal families. I was requested to say a few words to them.  Having never had this opportunity before, I was curious to find out what their aspirations were and was pleasantly surprised to hear “nurse, doctor, banker” as their response to my questions. One of the girls said she was well on her way to becoming a professional dancer. I wondered aloud, “is there someone in interior Jharkhand that teaches professional dance?”  She smiled at me, showed me the cell phone tucked in​ her tribal dress, ​ at her waist​, and said​ “This is my teacher”​. ​

The technology that fascinated and intrigued a city businessman and that required his well-educated daughter to undergo multiple courses before she could put her hands on it, in the air conditioned confines of a ‘computer room’ just a few decades ago, now more powerful by a million times over, was now tucked in a high school girl’s waist in a remote tribal village and showing her the path to making her dreams come true.

Over the years spanning my working career, to see, experience, evangelise, deliver ​this technology and then ​look into the users​​ eyes to see the gleam of achievement, of having learnt, nay, conquered, this technology, is an experience I would not swap anything for.

From the back office, where a few experts worked on it to the ​a common woman’s ​palm, as an integral part of her daily life, the journey computing has made with almost seamless ease and at a breakneck speed, is totally unparalleled in the history of the human race. And what is more, the journey, far from over, is only accelerating.

In these columns, over the coming weeks, I will share snippets and stories of my journey, based on my first-hand experience of the changing impact of computing on work and play, on business and government, on society at large and on the individual in their daily life.