From the Frying Pan into the Fire: How Google’s Practices Raised its Ugly Head With the iMessage Spat 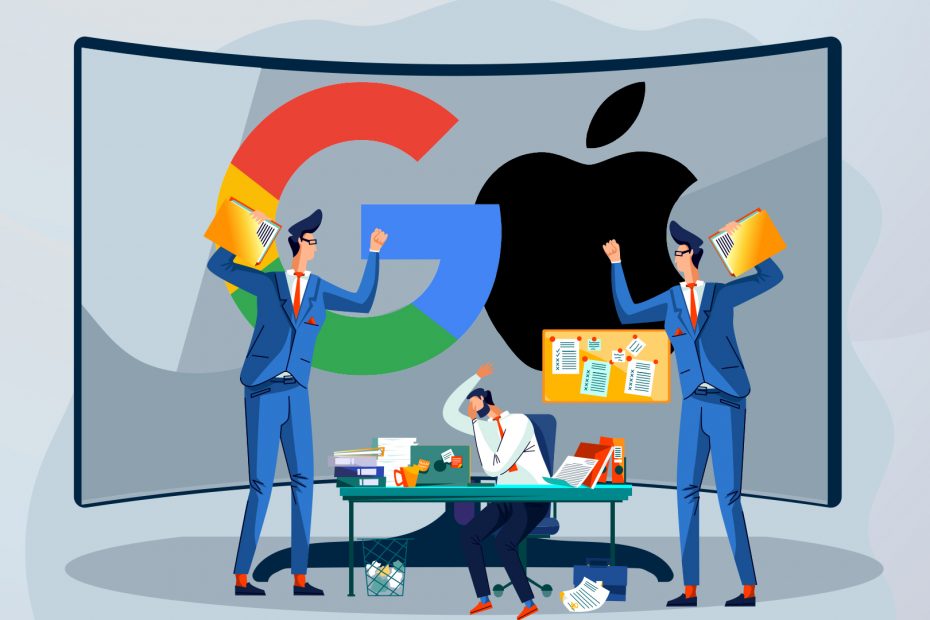 Hypocrisy usually sticks out like a sore thumb. The latest Twitter feud between Google and Apple representatives brought out a lot of questions. Is Apple right to maintain the exclusivity of its iMessage services? Is there any substance to the bullying claims that Google says its users face?

These are all valid questions to some degree. However, those in the app developing community were bemused by Google’s recriminations at Apple. How can those who employ restrictive policies on their app store point a finger at another company for trying to maintain the status quo?

We think that there’s a need for another set of questions directed towards Google, like the one asked above.

But what is it that sparked the latest feud between these two Big Tech companies?

Hiroshi Lockheimer, a Google executive, posted a tweet that spoke against Apple’s “lock-in” strategy with iMessage. He also shared a link to an article published in the Wall Street Journal that elaborates on the peer pressure that non-iPhone users face to switch over to Apple because of iMessage.

Apple’s iMessage lock-in is a documented strategy. Using peer pressure and bullying as a way to sell products is disingenuous for a company that has humanity and equity as a core part of its marketing. The standards exist today to fix this. https://t.co/MiQqMUOrgn

Google is attacking Apple from this angle. To protect users from bullying, why not adopt a system that works across both operating systems, viz. Android and iOS? Thus, Google is pushing for Apple to integrate the RCS or Rich Communication System, which is an upgrade to the outdated SMS.

Apple is no saint here. They don’t want to accept Google’s proposal to adopt RCS. And they’ve pointedly claimed that they don’t want iMessage to appear on Android devices because that would make parents buy Android phones for their kids.

But the blatant anti-competitive practice of Apple is overshadowed by Google’s hypocrisy.

Google is apparently positioning itself as the altruistic one, but have they been in a charitable mood when it comes to some of its own services and practices?

For example, a tweet by Luther Lowe, SVP of Public Policy at Yelp, highlighted how Google is shifting away from focusing on the user and now using its search engine to favor its own content rather than being unbiased when displaying information.

It’s quite rich to see Google executives complaining about the absence of interoperability in markets where they’d like a stronger foothold. Perhaps start here, Hiroshi: pic.twitter.com/rRCBx7peTO https://t.co/PTr8Hy9va5

Or consider the fact that Google (and Apple) have been pulled up for questioning by several antitrust organizations around the world. They’ve not been spared on the Indian turf too. The Competition Commission of India (CCI) ordered a probe into the unfair practices of the Big Tech duo earlier this month. Even news agencies in India have raised a complaint on how they’re making losses due to Google’s hoarding of all web traffic and ad revenue.

Where is all the gusto when it comes to answering these kinds of questions?

Neither does it help Google’s case when their own iterations of a messaging service failed over the past several years. They’ve had 13 different messaging products, each with varying degrees of success. It makes you wonder if they’re really doing this for the users.

The Answers We Need

Google whipped up a storm in 2020 when they announced that all app developers have to use only Google’s Billing System for any sales of digital goods. This meant that developers would end up paying a 30% commission on each transaction.

But companies and developers harshly objected to this policy. This led to a reduction in the commission fees from 30% to 15%. However, Google still expects developers to migrate to their billing system by October 31st, 2022.

This is where the main contention lies. Developers have their hands tied behind their backs if they cannot choose their own payment system. The case is ongoing, and the investigation is expected to be completed in the next month and a half.

Another question is on alternative app stores. Google wrote back in 2020 that developers have the freedom to distribute their apps on their choice of app stores like Indus App Baazar. However, any user wanting to install a third-party app store on their phone would be required to go through a tricky process, which an average user wouldn’t bother doing. Furthermore, any user actually attempting to install a third-party app store is flashed a warning sign against the installation, further discouraging the use of an alternate app store.

Google and Apple can bicker all they want, but there are several glaring unresolved issues that many seek an end to.

Unless Google and Apple loosen their grip on the empires they’ve created and allow freedom of choice to reign, there’s always going to be problems.

In India, an app store like Indus App Bazaar could break the mold and allow users and developers to experience an ecosystem that isn’t restrictive.

We may yet see the light at the end of the tunnel. We wait and see.