App stores are vital for any operating system’s success. One major reason Android is so immensely popular — while alternative operating systems like Windows Phone, Symbian, or Ubuntu Touch failed to grab the same success — is the wide availability of apps.

If you have been an Android user for some time, you will be familiar with the ease of finding and installing any app on your smartphone, even when the app is officially not available in your country or does not even support your device.

While all Android smartphones in India come with the Google Play Store pre-installed, you may want to explore other options to ensure you have the best apps at your disposal. This is why we are listing the top Android app stores you can install on your Android phone to download billions of apps. 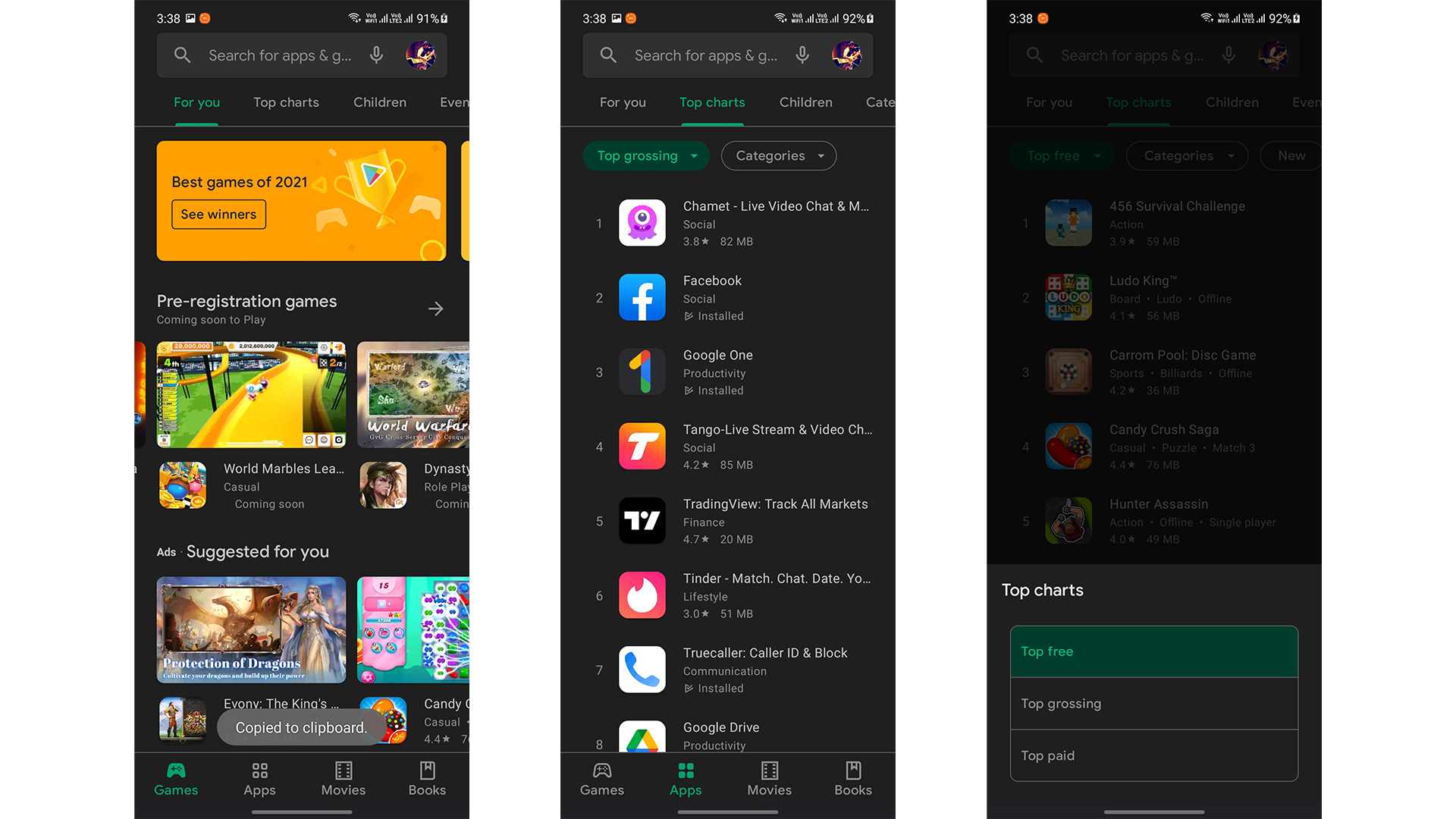 Needless to say, Google enjoys a monopoly over the Android ecosystem, especially in regions where laws are not very stringent, but that does not mean users do not benefit from its dominance in the mobile market.

According to Statista, the Google Play Store has nearly 3 million (30 lakh) apps as of 2021. However, there was a time when Google’s app store had more apps. In 2018, the Google Play Store’s app count peaked at 3.6 million apps but it was subsequently reduced after the company’s efforts to weed out malicious and outdated apps.

With security as its prime concern, Google Play Store features “Play Protect” that routinely scans apps for any suspicious content and removes them from the store. However, the algorithm can sometimes incorrectly flag new features as security threats, leading to unfair delisting of apps. This can be especially disadvantageous for small developers who anyways have to pay Google a commission for any revenue they make through the app.

Besides Android smartphones, the Google Play Store is also supported on Chromebooks running Google’s Chrome OS allowing users to install and experiment with tablet versions of the apps on their Chromebooks.

If you are a developer, then there are some other lucrative options for you to market and sell your apps. These come in the form of alternative app stores on Android and we have listed the most popular ones below.

As mentioned above, while Google Play Store is the default app store on Android devices in most regions, you can get a better experience if you use an alternative app store on your device. The following sections of this article talk about other app stores in India which offer more benefits to users as well as developers. 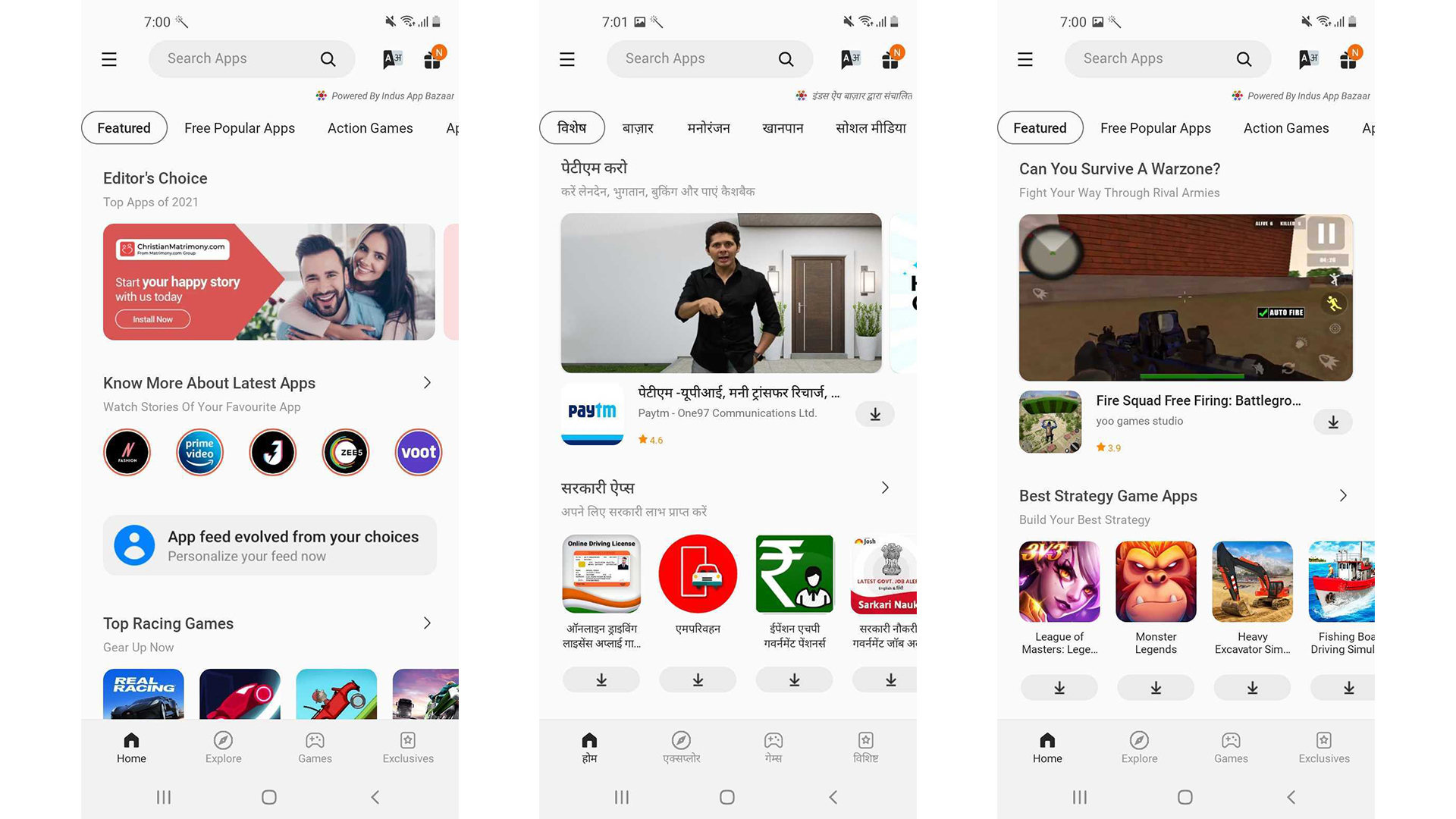 The Samsung Galaxy Store comes pre-installed in over 125 countries on all Samsung Galaxy smartphones, tablets, Samsung Watches and Watch Active smartwatches. The app store is also available on other devices that run on Samsung’s proprietary Tizen operating system (although these platforms do not support Android apps).

The Galaxy Store exclusively offers Android apps and Samsung’s own apps such as the company’s suite of apps for fitness, work, music, admin controls, and many more.

The Samsung Galaxy Store in India comes with one advantage that is not available anywhere else in the world. In India, the Galaxy Store is powered by Indus App Bazaar, which offers more than 400,000 apps from established companies as well as indie developers.

But it’s not the availability of Indian apps that makes Indus App Bazaar peculiar.

Indus OS, the company that developed the Indus App Bazaar, invests a huge portion of its resources to translate app store listings including the app name, description, and screenshots from English to as many as 12 Indic languages so that vernacular users can find the right app for their needs and understand the utility of an app. Besides the translation of the app descriptions, Indus App Bazaar prioritizes the localization of content by serving apps that are relevant to a particular geographical location. The app store serves users with suggestions that are tailor-made to them based on their language and the location chosen by them.

Alongside apps, the Indus App Bazaar offers additional interactive features, outweighing its competitors. To engage more users, Indus App Store uses videos and Instagram-like stories from app developers on the homepage. In addition, screenshots within app descriptions are complemented by videos, allowing users to learn more about any particular app. Together with the localization features, these interactive elements make the Samsung Galaxy Store powered by Indus App Bazaar much more attractive than most of the other alternatives we have listed in the list below.

Currently, Indus App Bazaar exclusively powers the Samsung Galaxy Store which means that you will have to use a Samsung smartphone in India to be able to use the app.

Xiaomi is the largest smartphone brand by volume in India. All smartphones and tablets from Xiaomi and its spin-off brands — Redmi and POCO — come preinstalled with the company’s own app store called Xiaomi GetApps.

Unlike the Google Play Store which recommends apps similar to your previous downloads and browsing history, the GetApps store shows recommendations based on the most popular apps across different categories including Entertainment, Social, Communication, and Must-Have. Additionally, the Xiaomi GetApps app store shows curated popular apps in the form of daily and monthly lists.

The app store also has a rewards section where users can partake in daily contests and lucky draws to earn credits that can be used to purchase apps or as in-app credits in supported apps.

The Xiaomi GetApps has a few downsides. Firstly, the recommended apps may not be on par in terms of quality with those recommended by Google in the Play Store even though Xiaomi’s security app claims to test each app for any malicious content. The recommendations can also appear in the form of regular notifications — essentially as advertisements — to users. Lastly, GetApps suggests users to install certain “Essential Apps” every time they open the store and this might mislead certain users who are not well-versed with technology to download apps they do not really want. 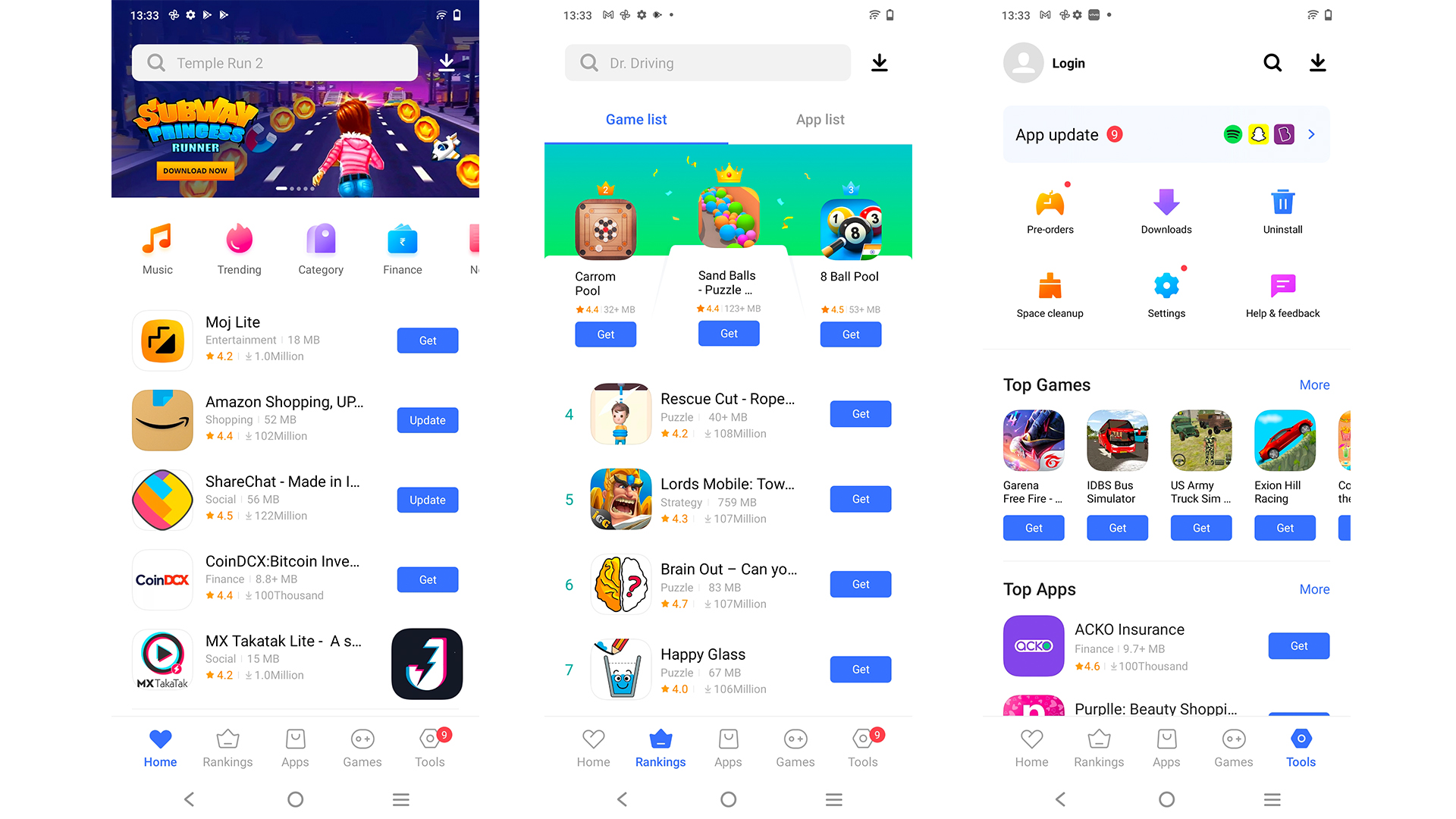 Vivo’s V-Appstore functions similarly to the Xiaomi GetApps store, offering top trending recommendations based on the location instead of the users. Top recommendations are shown at the top of the page in form of a scrolling carousel. However, suggested apps in Vivo’s app store — just like Xiaomi’s GetApps — appear to lack the same level of scrutiny and moderation. On a positive note, Vivo allows users to turn on personalized recommendations that might be better optimized for each user’s downloads and browsing preferences.

With FunTouchOS 11 that is based on Android 11, Vivo has organized the interface to look cleaner and less cluttered than before and this gives Vivo’s app store a more attractive appearance.

The App Market is part of OPPO’s ColorOS and is also available on Realme devices that run on Realme UI, which is a slightly modified version of ColorOS. The ColorOS App Market has much in common with the Vivo app store and shows popular apps grouped under Games, apps, and top apps. You also get top app recommendations in the form of cards at the top of the page.

One benefit the ColorOS App Market has over other competitors is that it segments different apps in various categories like Communication, Entertainment, Music, Social, Food & Drinks, etc. allowing users to discover apps easily. 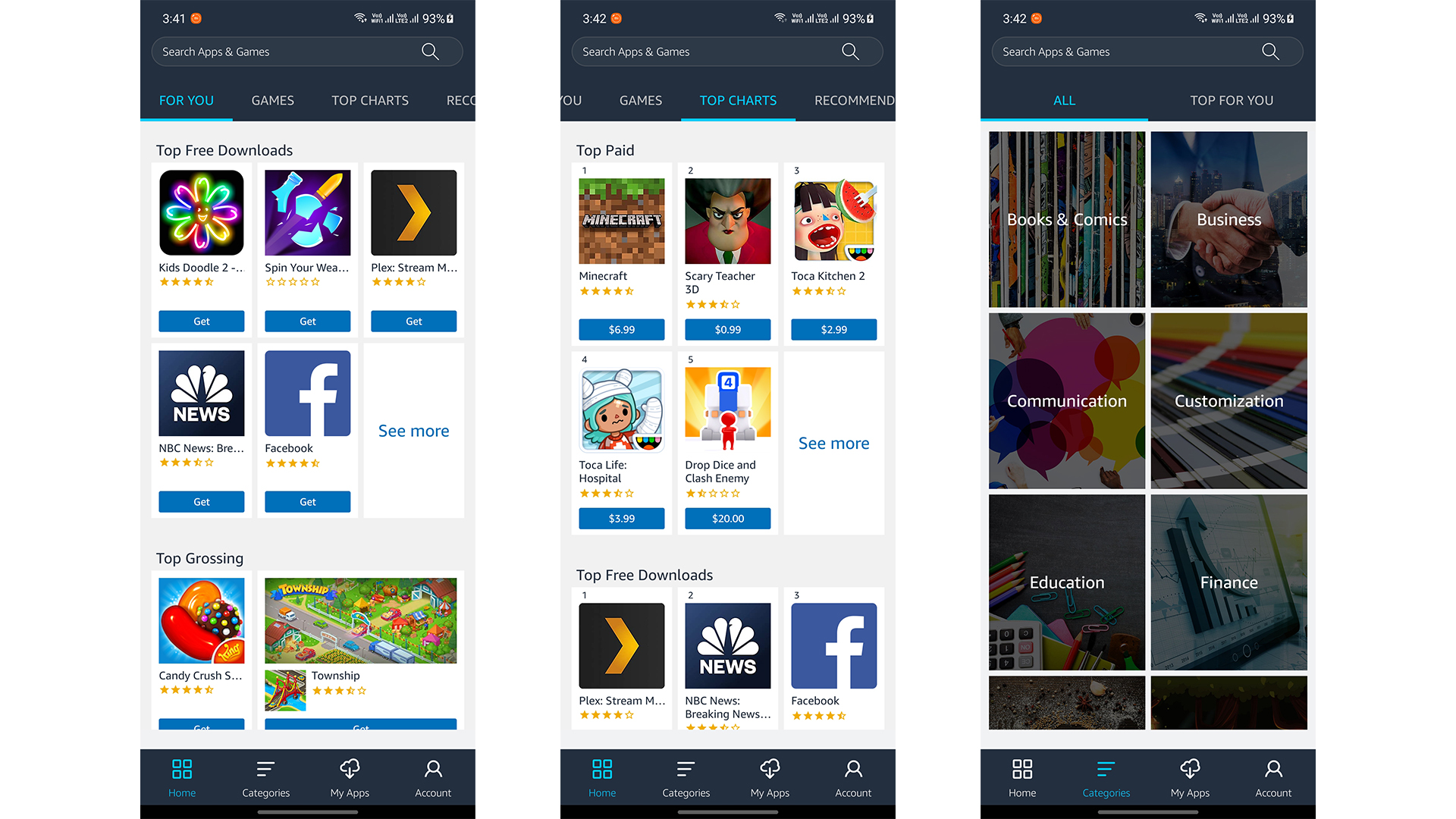 The Amazon app store is one of the biggest marketplaces for Android apps. It is especially beneficial for devices that do not come pre-installed with any app store, especially the Google Play Store. Within the Amazon Store, Android apps are primarily organized on the basis of popularity and these are split into groups such as Top Free, Top Grossing, Top Paid apps, etc. It also presents featured apps and games.

One specific benefit of the Amazon app store is that it features and lets you download apps that are not available in your region. However, the payments are done in USD and might require a credit card. Transactions may also entail convenience charges along with direct currency conversions.

The Amazon App Store is available to download via Amazon.com. You can also find it here. 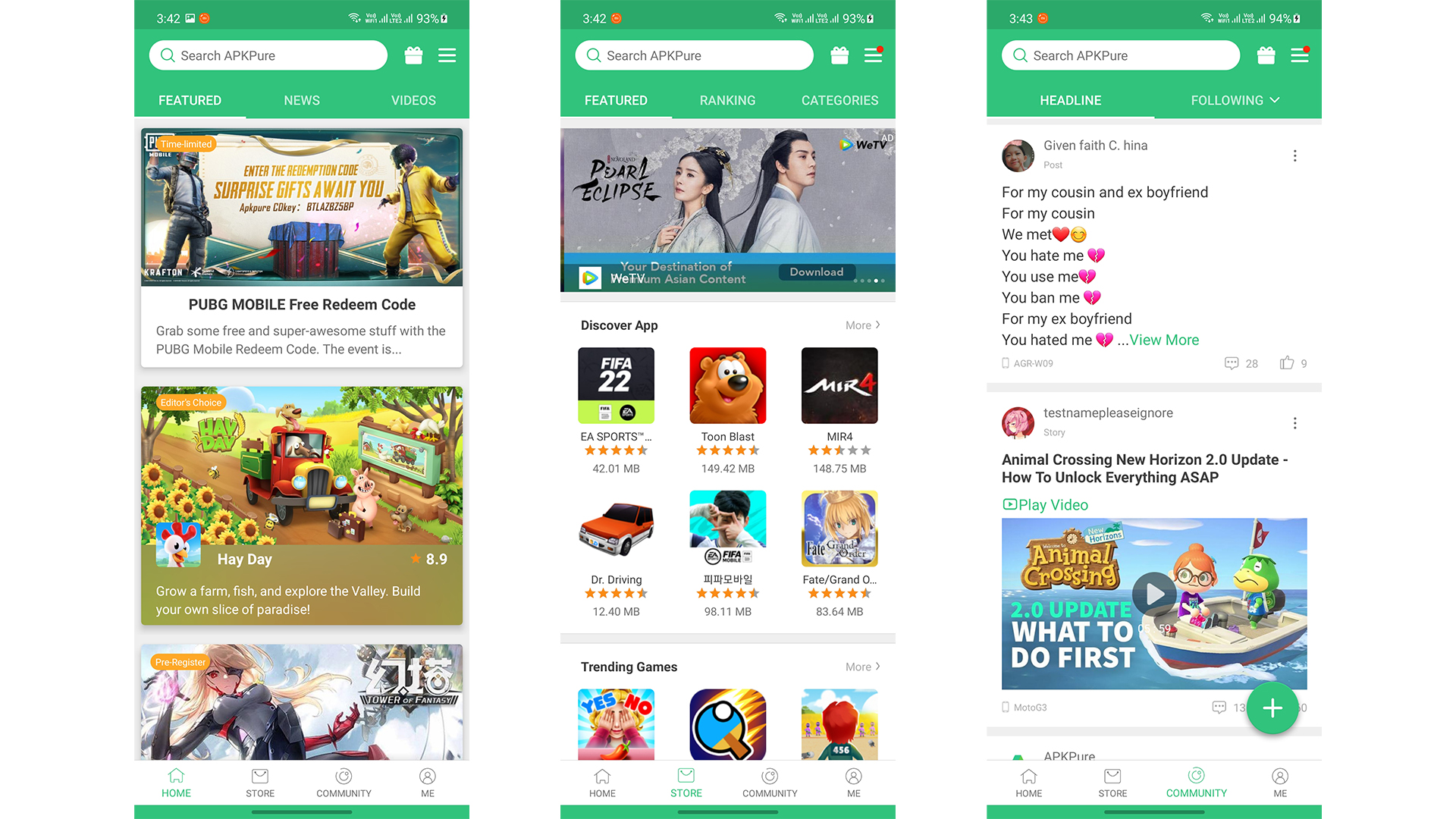 APKPure is one of the most popular third-party app stores that lists noteworthy apps and games from across the world. The first screen is dedicated to featured apps that are represented using large cards. Like other stores, APKPure also features an app discovery section where apps are listed under different categories and sorted on the basis of popularity. In addition, you can also update any app that was not even installed using APKPure and manage app bundles along with APK installer files. Another benefit APKPure brings is its Community where discussions span across different topics and are not just limited to apps.

On APK Pure, you can install apps that are either not available in your region or geo-restricted. Additionally, users can also find paid apps and install them for free. While that may be seen as advantageous, it can be a concern from a security point of view. Such apps, which may not be signed by developers themselves, can contain code modifications and can be used in data theft or other malicious activity on your Android device.

F-Droid is another popular aftermarket app store for Android devices. It is especially dedicated to free and open-source software (FOSS) and is one of the largest online repositories of open-source Android apps. The Android client uses a minimal interface with app icons clearly laid out in a variable grid along with single-line descriptions of these apps. The apps within the F-Droid app store are also divided into categories including Development, Games, Graphics, Money, and more, and you can search for specific terms within a single category for more accurate results.

Along with downloading apps, the F-Droid store on Android can be used to transfer apps from one phone to another without the internet. Lastly, developers and users can visit the news section and forums to learn more about advancements related to the F-Droid community or the Android FOSS ecosystem in general.

Once again, since these apps are not reviewed by any authority, there can be some unwarranted security issues. So make sure you only download apps that genuinely look useful to you.

You can download the F-Droid app store client for Android by clicking here.

The last Android apps marketplace in our collection is the Aptoid App Store, which allows you to download free as well as paid apps from various developers across the world. Aptoide presents itself as an alternative to the more popular options including the Google Play Store. It allows various independent developers, OEMs, telecom operators, and other integrators to create their own mini-stores inside the Aptoid app and these mini-stores can be managed independently by these stakeholders.

Aptoid claims to have 50 million unique active users around the globe and this makes it an excellent opportunity for developers to publish their apps if they wish to bypass the commission on the Google Play Store. Aptoid also lets users buy digital currency called Appcoins for in-app purchases.

Get Aptoide for your Android device from here.